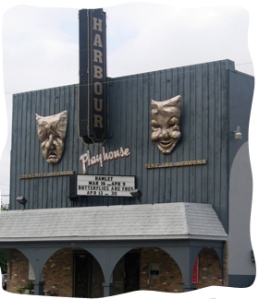 This marvelous old historical building, previously named “The Hollywood”, was first opened in 1941 with the movie “When Ladies Meet” starring Joan Crawford and Robert Taylor. Many of these wonderful old movie houses have disappeared from the American scene.

The Number “1” Plays & Players was originally chartered in 1980 as a non-profit theatre group that did not have its own home, but still enjoyed performing annually at Galveston’s Dickens On The Strand, and for NASA employees at the Gilruth Center. After 38 years of teaching in the public school system, Mrs. Bennie Nipper retired and made her dream come true. Bennie and Oscar Nipper and the Board of Directors of Number “1” Plays and Players, began restoring and remodeling “The Hollywood” in 1990. Re-opened in 1991 as the Harbour Playhouse, it became well-known as a center of fine arts for the community with live productions and classes in performing arts for children, teens, and adults.

Your moral and financial support in our continued efforts is greatly appreciated. Your active participation is requested by purchasing season tickets, becoming a contributing “Anchor” for the Arts or a Corporate Sponsor, placing an ad in our programs, attending performances, donating time and supplies, enrolling in classes, auditioning for productions, or volunteering in many other ways. As a non-profit organization, we rely on generous contributions and support from businesses, corporations, and private donors. All donations are always tax deductible and may also be deductible as a charitable contribution business expense. We thank you for supporting the arts in the Bay Area, and helping Bay Area Harbour Playhouse in its mission to provide quality arts education and entertainment to the surrounding communities.